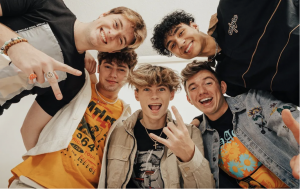 ORLANDO, FL, USA, January 11, 2023 /EINPresswire.com/ — Orlando-based boy band No Lonely Hearts is set to kick off the new year on their first-ever tour to major cities across the US. Being no strangers to the stage, No Lonely Hearts plans to captivate the nation with stellar vocals and killer choreography. With hits including “No Lonely Holidays”, “Cruel Summer,” and “No Body Else,” they continue to win over the hearts of their growing fanbase.

Fans can expect a high-energy show that will feature all of the band’s hits, and some sneak peeks at new material the band is working on. Astute fans had the opportunity to get a rare look at their performance chops during 2022’s Playlist Live.

Tickets for the above dates can be purchased directly from the referenced venues or by visiting https://nolonelyhearts.band.

About No Lonely Hearts
No Lonely Hearts (NLH) is America’s hottest new boy band, composed of five young men that were hand selected by the team that worked with notable boy bands and music acts, during an intense, nationwide audition process. Ranging from 18 to 22, Oliver, Brian, Dylan, Aidan and Alex spent the last year working with the same team who helped create those acts. No Lonely Hearts has been busy in the studios with top producers and writers in anticipation of their 2023 tour and EP. The band recently released their holiday album, “No Lonely Holidays.”

Police chase ends with surrender before car goes in flames