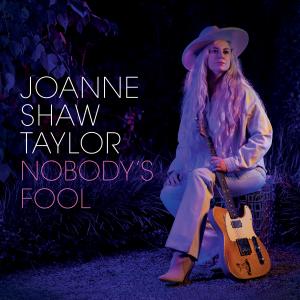 “Fade Away is a song I wrote about my mom who we lost in 2013. It’s a song about missing her, not being able to talk to her and if I was able to talk to her, the advice she would give me and what would she say.” – Joanne Shaw Taylor

The album Nobody’s Fool will release worldwide on Joe Bonamassa’s KTBA Records on Friday, October 28th. The album is available to pre-order NOW.

The new album, recorded at Sunset Sound in Los Angeles, is produced by Joe Bonamassa and Josh Smith and features Joe Bonamassa on “Won’t Be Fooled Again,” guitarist Carmen Vandenberg (Bones UK) on “Figure It Out,” cellist Tina Guo on “Fade Away” and music legend Dave Stewart on a cover of the Eurythmics classic “Missionary Man.”

“Nobody’s Fool just might be her best album yet.” – Blues Matters

“This is top-shelf blues on all levels that also packs huge crossover potential. Be the first one on your block to hear it!” – Rock and Blues Muse

“Joanne Shaw Taylor continues her recent run of killer albums with a stunning new studio collection that is guaranteed to further widen her audience beyond the confines of blues rock.” – Blues in Britain

“With masses of crossover appeal, Nobody’s Fool has the potential

to be huge. 13 years after her debut album she might well find

herself the next overnight sensation.” – Record Collector

Joanne was born and raised in the UK and was discovered at the age of 16 by music icon Dave Stewart of the Eurythmics. Right from the get-go, Joanne’s incredible guitar playing, and distinctive sultry vocals set her apart from the rest of the crowd.

Nobody’s Fool is her most personal album to date. Joanne’s writing lays bare love, loss, and the desire to be free of the past through the vessel of catchy hooks and infectious guitar riffs.

Her vocal style, writing prowess, and guitar skills take the listener on a journey into the wasteland of love and back into the light of hope and redemption. Nobody’s Fool takes Joanne into new territory that can be described as retro pop with a modern flare, yet still encompasses the emotion of her blues roots.

Joanne wrote all the songs on the album except “Missionary Man,” which is written by Annie Lennox and Dave Stewart of the Eurythmics.

TICKETS ARE ON SALE NOW AT JOANNESHAWTAYLOR.COM

Joanne Shaw Taylor was discovered by Dave Stewart of the Eurythmics at the age of 16 who, having watched her play, immediately invited her on the road with his supergroup D.U.P. – a career in music was born and in the proceeding years, her incredible guitar playing saw her build an army of plaudits including Jimmy Cliff, Joe Bonamassa, Stevie Wonder, and Annie Lennox.

Still, only in her 30’s, she has become one of the most sought-after guitarists in the world of rock. She released her first album on Ruf Records entitled “White Sugar” (2009), unleashing her distinct soulful voice on the world, and demonstrating a songwriting prowess way beyond her years – the world of blues rock had a new star! Over the next few years, she released critically acclaimed albums including her sophomore album “Diamonds In The Dirt” (2010), “Almost Always Never” (2012) which featured the UK radio hit “Soul Station”, plus her final album for Ruf Records – the live album “Songs From The Road” (2013).

In 2014 she released her fourth studio album “The Dirty Truth” on Axehouse Records which featured the singles “Mud, Honey” and “Wicked Soul”. In 2016, Joanne followed up with the release of her fifth album “Wild” (Produced by Kevin Shirley) which saw her perform songs “Dyin’ To Know” and “Summertime” on BBC Two Television’s popular music show “Later With Jools Holland”. Three years later, in 2019 she signed to Silvertone Records via Sony Music and released her sixth studio album, “Reckless Heart”.

Over the past two decades, Joanne has proven herself as a prolific songwriter, releasing seven acclaimed albums under her belt, each increasingly more successful with her 2019 “Reckless Heart” breaking into the UK Top 20 Album Chart and cementing herself as one of the most important exports in British blues-rock.

Her seventh studio album “The Blues Album”, produced by Joe Bonamassa and Josh Smith at Oceanway Recording Studios in Nashville, Tennessee, was her first released on Bonamassa’s independent label KTBA Records in 2021 and debuted at #1 on the Billboard Blues Charts.

On April 20, 2022, Joanne received her 2nd #1 Billboard Blues album with “Blues From The Heart Live”. On October 28, 2022, she will release her brand-new highly anticipated (eighth) studio album “Nobody’s Fool” produced by Joe Bonamassa and Josh Smith.

Joe Bonamassa and his long-time manager, Roy Weisman, have put their decades of expertise to use with their new venture, Keeping the Blues Alive (KTBA) Records. The independent record label is an offshoot of Keeping the Blues Alive Foundation, Joe Bonamassa’s non-profit that aims to conserve the art of music in schools and preserve the rich culture and history of the blues.

Since its inception in 2020, KTBA Records has proven to be a driving force in the music industry, taking on talented artists and propelling them into the spotlight. The label has released albums for Rock & Roll Hall of Fame Inductee Dion, Chicago blues queen Joanna Connor, legendary Detroit-based blues guitarist Larry McCray, and blues rock sensation Joanne Shaw Taylor. Each album has received worldwide critical acclaim as well as topping the Billboard Blues Album Chart. This is only the beginning for KTBA Records. With its roster of talented musicians and success in the industry, the label has many new projects on the horizon, working synergistically with the non-profit’s mission of supporting musicians. 10% of all profits from KTBA Records are donated to the foundation.

KTBA Records represents Bonamassa’s continuing efforts over the last 25 years in support of the artistic community and reflects the philosophy of paying it forward just as so many did for him in the hope of paving the way for musicians for years to come. To support KTBA Records’ mission and its talented artists, visit KTBARECORDS.COM.