Cinnamon Market to Record CAGR of 3.7% Increase in Revenue by the End 2030 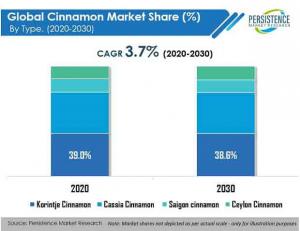 
NEW YORK, NY, UNITED STATES, December 1, 2022 /EINPresswire.com/ — Cinnamon is increasingly becoming one of the most demanded spices across the food and beverage industry, owing to its vibrant flavor and several health benefits. Food manufacturers are utilizing cinnamon to make different types of beverages, which are widely being accepted by consumers. Cinnamon spiced tea, apple cinnamon spritzer, cinnamon-spiced coffee, and cinnamon spice punch are some of the cinnamon-flavored beverages that are becoming popular amongst consumers. Furthermore, cinnamon is also widely utilized in several alcoholic beverages to provide a cinnamon flavor to the drinks. Fireball cinnamon whisky, Cannella spirits, and Goldschlager cinnamon schnapps are common examples of cinnamon-flavored alcoholic offerings.

For instance, in August 2019, Coca-Cola launched a new cinnamon-flavored coke in the U.K. The company is planning to introduce this drink across more areas as well.

Key Takeaways of Cinnamon Market Study
• By type, Ceylon cinnamon is expected to register the highest growth rate in the global cinnamon market during the forecast period. A major contributing factor is the high quality of Ceylon cinnamon along with the low level of coumarin.

• The conventional segment is dominating the cinnamon market with the highest market value share. However, the growing influence of organic food products is a major growth factor that will surge the organic segment in the future.

• Due to the coronavirus pandemic, the export of agriproducts such as cinnamon has slowed down, especially from South Asia and East Asia. The pandemic has had an immediate negative impact on the demand for cinnamon from food processors and manufacturers, who are the key importers of cinnamon, especially in North America and Europe.

• Post pandemic, more stringent export protocols and regulations may be outlined. This may continue to impact the supply chain for the second quarter and initial half of the third quarter of 2020, and impact the demand for food processing and agri-produce such as cinnamon.

“Manufactures in the cinnamon market could gain profits by targeting beverage and foodservice providers due to the increasing use of cinnamon in the beverage industry, especially in alcoholic beverages. Moreover, the growing utilization of cinnamon sticks and powder in foodservice restaurants is another potential growth factor for the market. However, the COVID-19 pandemic is expected to have a moderate effect on the food and beverage industry, which, in turn, will negatively impact the cinnamon market to some extent in the months ahead,” says a PMR analyst.

For critical insights on this market, request for customization [email protected] https://www.persistencemarketresearch.com/request-customization/20272

Cinnamon Market: Competitive Landscape
The cinnamon market is consolidated in nature. Key players operating in the cinnamon market are adapting their market strategies to benefit the most from prevailing market trends. Leading manufacturers are adopting strategies such as business expansion and strengthening their supply chain with a focus on increasing production capacity. Additionally, manufacturers are aiming to cater to the rising number of health-conscious consumers to gain a competitive advantage.

Buy Full Report Now and Get Up to 20% Discount @ https://www.persistencemarketresearch.com/checkout/20272

About Us
Persistence Market Research is a U.S.-based full-service market intelligence firm specializing in syndicated research, custom research, and consulting services. Persistence Market Research boasts market research expertise across the Healthcare, Chemicals and Materials, Technology and Media, Energy and Mining, Food and Beverages, Semiconductor and Electronics, Consumer Goods, and Shipping and Transportation industries. The company draws from its multi-disciplinary capabilities and high-pedigree team of analysts to share data that precisely corresponds to clients’ business needs.